There are so many sexy add-ons for FS – planes, scenery, environment packs, and so forth – that some of the more useful bedrock utilities sometimes get overlooked or taken for granted. I just added a new one to my list of  must-haves this week, and it got me to thinking about which of the behind-the-scenes players I wouldn’t want to fly without.

For a whole slew of reasons, it’s necessary to reinstall FSX now and then. Once I’ve got the base sim installed, the first add-ons I head for are my trusty utilities. They’re the background programs that add functionality, correct sim problems, and generally make sim flying a whole lot more enjoyable. Here are a couple, with more to follow soon:

Ah, the venerable Flight Simulator Universal Inter-Process Communication module. A mouthful to say, but just about the most useful FS utility ever designed. Pete Dowson has been building versions of this utility for as long as I’ve been flying, which is about 10 years, and I’m sure he was around well before then. Ask a hundred serious ‘simmers which utilities they rely on, and I’ll bet FSUIPC is near the top of just about every list. 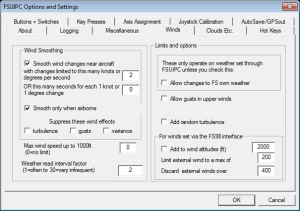 The better question would be what doesn’t it do? I’ve heard it called the Swiss Army Knife of add-ons, and for good reason. The registered (payware) version has facilities for fixing sim boo-boos as extending aircraft battery life, eliminating controller spikes, setting visibility limits for various types of weather, smoothing wind transitions, controlling cloud layers, adding icing and turbulence effects in clouds, and on and on and on. In fact, just glancing through the manual makes it obvious that even trying to hit the high points of this module’s functionality would take a whole blog post. 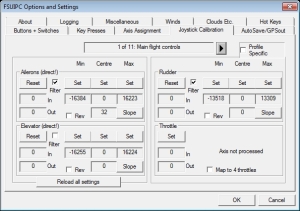 One FSUIPC ability that I use more than any other is the controller axis & button assignments. Essentially, I’ve unassigned all my controller axes in the FSX control panel, and used FSUIPC to handle them instead. This not only gives me greater control over the calibration and responsiveness of the controls, it also allows for setting different controller profiles for specific aircraft. For instance, I’ve got one profile called “Yoke GA” in which the yoke controls pitch and roll and my throttle does the usual throttle/prop pitch/mixture grouping. In my “Yoke Airliner” profile, the same throttle quad levers now control throttles, speedbrakes, flaps, and gear. Once the profiles are set up, adding a new plane is as simple as loading it up and going to the FSUIPC control panel’s Axis Assignment panel, then choosing the profile that matches the new plane’s layout. 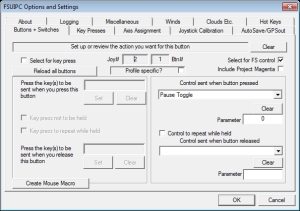 How It Makes Flying Better
In addition to fixing some of the handful of FSX annoyances, FSUIPC lets you fine-tune the sim visuals and set controller layouts to mimic the real-world cockpit functions. It also facilitates a behind-the-scenes dialog between add-ons and the sim, allowing them to receive input and output from one another.

How Much and Where To Get It
Download the module from Pete Dowson’s page on schiratti.com. The freeware version allows the bare-bones functionality of communication between sim and add-ons and a few weather functions. The payware version is approximately US$32 (24 Euros) on Simmarket.com.

This one’s not quite as long-lived as FSUIPC, but it’s been around for a few years now. Back in the FS9 days, I got hooked on Russel Dirks’s module, and was delighted when he carried it over into FSX not long after the sim was released. 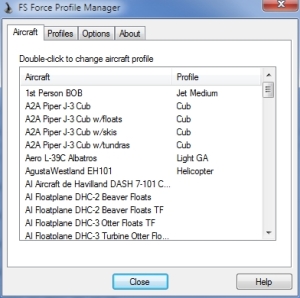 What It Does
FS purists sometimes decry force feedback joysticks as toys. Based on the way they react in FS by default, I can understand why they’d think that. What FS-Force does is light years ahead of the built-in FFB, however. In order to use it, you must first disable force feedback in the FSX controller settings – the module acts as a stand-in for that, using information gotten directly from the sim to send a custom set of forces to the stick.

I’m not sure what the developers at Microsoft were thinking when they created their FFB implementation, but Russel got it right. In marked contrast to the bizarre see-saw behavior I’ve felt through the stock forces, FS-Force feels solid and responsive. It uses the concept of profiles in a similar way to FSUIPC in that aircraft are classified by how the various forces are brought to bear on their controls. The profile manager allows you to assign one of a number of pre-configured profiles to each of your planes. You can also edit each profile, or create entirely new ones. 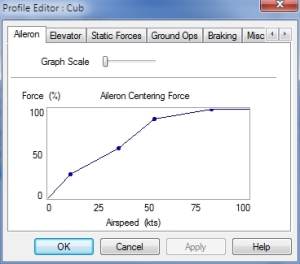 For example, I’ve got a special profile that I made as a copy of the “light GA” forces, called “Piper Cub”. In Light GA, the stick becomes progressively stiffer as the airflow speeds up over the control surfaces. In my Piper Cub version, the speed required for that stiffening is significantly lower than for a 172, owing to the fact that Cubs top out at much lower speeds. It’s just one more way to customize the individual personality of each plane.

In addition to control forces, you can also adjust such things as ground bumps experience during taxi and takeoff, how braking forces affect the controls, and the flutter induced by stalls. If you’ve got a force feedback lying around unused, FS-Force will bring it a whole new life. Having read on the forums that it works best with a Microsoft Sidewinder II FF stick (which are now out of production), I managed to find one on Ebay fairly cheaply. I’m happy to say it’s given me years of service, even though it was used when I bought it. 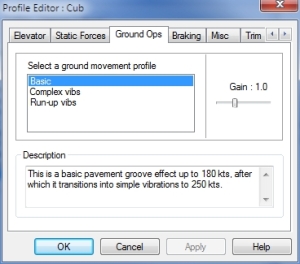 How It Makes Flying Better
FS-Force gives you the tactile “feel” of flying. Unlike the stock force feedback, it feels realistic, and allows for things like holding the stick back and trimming away elevator forces until it’s balanced in that position. This module will make you forget everything negative you ever heard about FFB.

How Much and Where To Get It
There are two versions available, one for FSX, and one for FS98 through FS9. Each can be bought from the FS-Force website for US$34.95.

Stay tuned, as a have a couple more must-haves that I’ll write about soon.