The AOPA is fond of saying it: of all the flights logged each day in the USA, the vast majority are small GA aircraft. And I’d be willing to bet good money that the bulk of those flights begin and end at small airports. So what do you know about your local aerodromes?

Americans have a tremendous bounty when it comes to aviation. Getting a PPL is cheaper here than just about anywhere, and oh, so many choices of where to learn!

Here’s an example from my real-world training: my home base was Portland-Troutdale Aiport (KTTD). The usual training drill would involve taking off and flying south, across the rolling foothills of the Cascades just east of Portland. We did S-turns, stalls, ground reference maneuvers, you name it. The one thing my instructor kept repeating during all of this was to be aware of where the nearest landing options were in case something went wrong. It wasn’t exactly a challenge, as this shot from the Plan-G flight planner shows. 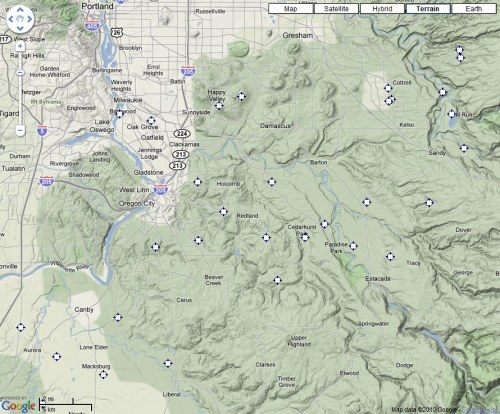 Every white dot is another airport. Some are fairly well-developed fields, while others are just grass strips. By my count, this area alone has about 30 of them, give or take. And bear in mind, this is within a few miles of downtown Portland. Multiply that by the ground you can cover in an hour or two in a light GA plane, and you’ve got hundreds of options for places to visit.

Ordinarily, heading off into the wild blue yonder in search of small airports yields mixed results in FSX. Sure, many of these fields are represented by default, but they’re often not much more than a rectangle of grass skirting with a runway plopped down – definitely not much to look at. However (and here comes plug), many of these fields have been given a complete makeover in FTX NA Blue, with the addition of custom buildings, refined layouts, and nifty extras like vehicles and 3D grass. So even if you think you know some of these airports pretty well, it might be worth it to give them another try in FTX.

I could yammer on about the cool small airports in FTX, but I’d rather just go flying and show you. Here’s a PIREP from a recent trip I took. Originally, I planned to fly from Twin Oaks (7S3) to Nehalem Bay State, which is on the Oregon coast just north of Tillamook. Coincidentally, the flight was a palindrome: 7S3-3S7. How often does that happen? 🙂

The weather ended up being so nice, and  the scenery so gorgeous that I passed Nehalem by and kept moving, all the way across the border into Washington, and the tiny airport at the Port of Ilwaco (7W1).

Here I am doing the pre-flight at 7S3 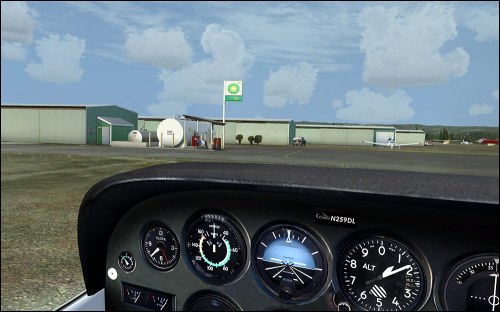 Lining up on rwy 20 on a beautiful spring morning… 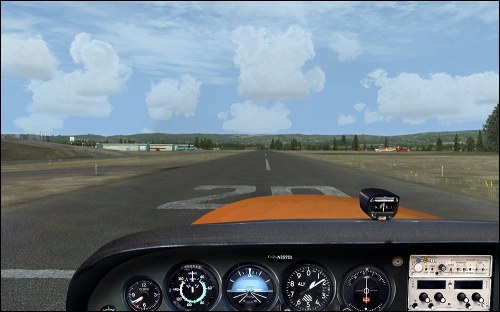 It’s a nearly due-west flight from 7S3 to get to Tillamook. Barring strong northerly or southerly winds, you can pretty much just point the nose at a heading of 255 and gun it. You know you’ve arrived at Tillamook when you see the huge wooden blimp hangar from WWII that now houses the Tillamook Air Museum. It’s a must-see if you’re ever in the area. Incidentally, this is a field I’ve got on the books to do in high-def for FTX at some point this year. 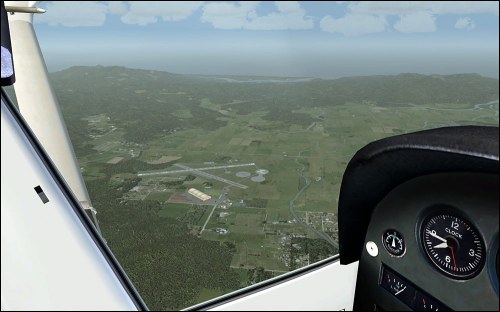 Past the airport, the bay opens up into the Pacific. 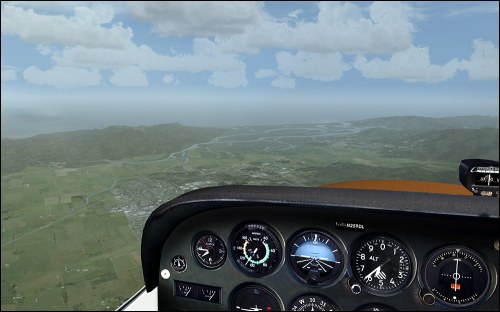 This is my signal to turn north, running just inland along the coast. The weather is a smooth as it looks, with little to no turbulence. Winds are coming from the north at 10 knots or so. Can’t ask for better than that. I took a snap as I overflew Cannon Beach, so named because of the British naval cannon that locals hauled ashore ages ago from a shipwreck.

Up ahead, you can make out the mouth of the mighty Columbia River emptying into the ocean. At the point where the river meets the sea is the town of Astoria, Oregon. Bomber pilots trained here in WWII to get experience flying “in the soup” over northern Europe. Luckily, this isn’t a good instrument training day.

Flying over Astoria proper, I lined up with the Astoria-Megler bridge, the longest continuous truss bridge in North America. 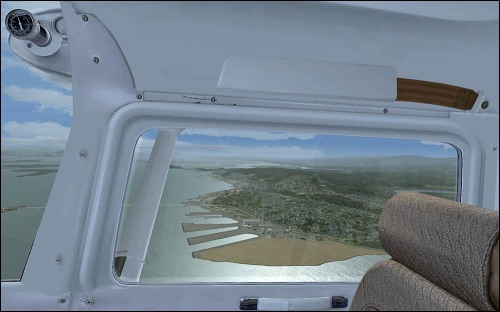 Washington, here we come! Ahead is the Long Beach peninsula, a funky ocean-side community that looks like something from a David Lynch movie. Our destination lies at the top of Baker Bay, at the port of Ilwaco. You can make out the VASI on the middle right of the shot.

Coming down low (too low, actually) over the marshy bay, I compensated for the northerly winds by aiming just to the right of the runway.

At the last minute, I managed to wrestle the plane onto the right path. Man, I need to practice my crosswind landings. 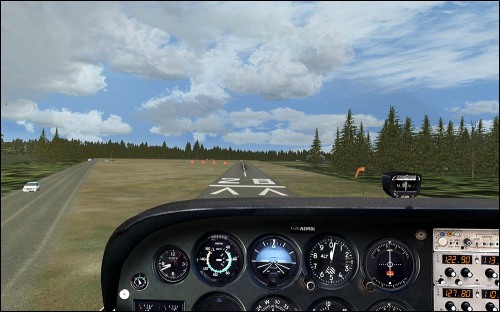 A few other planes were already parked, so I tucked up beside them. The weather was decent, so I decided to walk into town for something to eat.

Where to next? I’ll let you know when I figure it out. In the meantime, go have some small airport adventures of your own and let me know what you find.