Fanboy Friday: Getting the Itch

I’m getting it bad, people. Maybe it’s the recent spate of good weather we’ve been having, or the release of a beautiful patch of FSX scenery that covers my own back yard. Hell, maybe I just have a perverse need to spend thousands of dollars on something fun but relatively useless. You know what I’m talking about, don’t you?

That’s right. I’m considering a return to the skies for real. About five years ago, I took  a bunch of flight lessons that ended up with me within spitting distance of my PPL before the money ran out. Well, I say it ran out, but it was never really there in the first place. I just smoked a couple of credit cards in the hope that there’d be a way to pay for it all eventually, all the while repeating the mantra you only live once. In the end, I lost my nerve and backed down in the face of mounting debt. The mantra may be true, but I don’t intend to spend that life living in a cardboard box under the bridge.

Fast forward to today, and things are looking a little brighter. I paid off those credit cards and have some cash to spare (knock on wood), and now I find myself looking up every time I hear an airborne motor. My trip to Twin Oaks a few weekends ago only heightened my desire to climb back in the cockpit. At one point during the visit, I found myself asking Betty Stark a set of red-flag questions; exactly how much is it to rent a 172? Do you offer tailwheel instruction? How many instructors teach at this FBO? My wallet quivered in fear.

Thankfully it’s raining today, a reminder that while I might be getting spring flying fever, the weather isn’t ready to relent just yet. While I wait for the blue skies to return with their siren song, I’ve turned my eyes back to the sim world. And hey, look at that… even in FS, I’ve started “thinking real”.

For a few weeks now, sim pilots have been treated to a fantastic new series of videos that offer virtual flight instruction. Aviator 90 from Angle of Attack is a series that will eventually encompass 45 video lessons, each covering a specific aspect of flying. Chris Palmer has done a bang-up job of encapsulating the lessons every real pilot must learn into short videos featuring FSX, the Orbx FTX NA Blue PNW scenery, and in the most recent episode, my own Stark’s Twin Oaks. 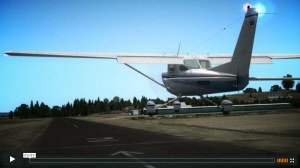 These episodes are largely to blame for my current PPL fever. The way Chris is presenting these lessons is so similar to my real-world instruction, it’s spooky. Couple that with the fact that the scenery he’s flying over is, in many cases, the same territory I saw from my actual cockpit, and the realism factor just jumps a few more notches. It’s self-serving for me to keep saying this, but I’m going to do it anyway: the PNW that Holger and company created is astonishingly realistic, head and shoulders above any other scenery I’ve seen for FS. Even if I had nothing to do with Orbx, I’d feel that way.

If you haven’t checked out Aviator90 yet, cruise on over and have a look. There’s something of interest there for even the most experienced pilot.

Get Your FTX On – For Free! 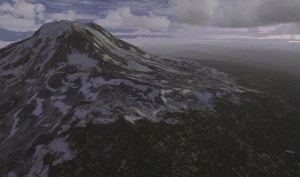 I’m jumping the gun a little with this news. If things go as planned, at some point today you PNW fence-sitters will be able to download the free NA Blue demo. It covers the entire Olympic Peninsula, and offers a few of what this scenery looks like in a single season: spring. Given the immense size of the land area included, you ought to be able to get a very good idea of not only what the scenery looks like, but how it’ll run on your rig. For more info, and to check on the availability of the demo, head over to fullterrain.com.

In a fit of unbridled nostalgia, I went poking through my digital photo archives a few nights ago. Mis-filed in a folder marked “San Diego Trip 2005” I found a set of photos I took back when I was doing my PPL training. The ones that caught my eye were pics I took of the instrument panel of N1911V, my trusty (if slightly rusty) steed. Apparently, I was planning on doing something with these shots in FS, though I don’t recall what.

Then it hit me: I got the Carenado 172N back before Christmas when they were having a sale. The reason it appealed to me was that it was nearly the same model as my trainer, which was a 1975 172M. Almost everything about Carenado’s rendition is excellent, but I never liked the plain white panel they fitted it with. You see where this is going, I trust?

After a night or two of Photoshop kung-fu, I managed to pair my real-world panel pics with Carenado’s textures. The result, I must say, makes me grin. You can download it from the AussieX site (although you might need to register first, I’m not sure). Oh, and as part of reworking the panel, I upped the resolution from 1024 to 2048, so if you have your texture_max_load switch set to 2048 or higher in your FSX config, you can see it in its scratched, scuffed glory.

Grand plans I had. I was going to show you some shots of a virtual flight from Twin Oaks to Nehalem Bay State, following the real-world route that was featured in this forum article. Not only that, I was going to search the web and find more real-world PNW accounts that I could fly in NA Blue as well, all the while pelting you with great sim/real world comparison pics. Alas, something is rotten in my computer. Every time I switch aircraft (and sometimes even when I switch views), my plane goes transparent, or the ground smears, or the sky goes black. You’re an FSX flier, so you know the drill; it’s back to the testing bench to try and figure out why my system is suddenly borked. Gaaa.

In the meantime, I’ve been hearing really good things about this book “Microsoft Flight Simulator X For Pilots: Real World Training“. Sounds like what I’ve been yammering about, doesn’t it? If you’ve got this book, I’d love to hear from you. Is it as great as they say?

Here’s hoping for a fun weekend with some satisfying flying!

8 responses to “Fanboy Friday: Getting the Itch”