Okay, maybe “introducing” is a smidge of hyperbole since I’ve been yakking about this scenery for a while now. What I’ve been waiting to say for ages is finally true, however… 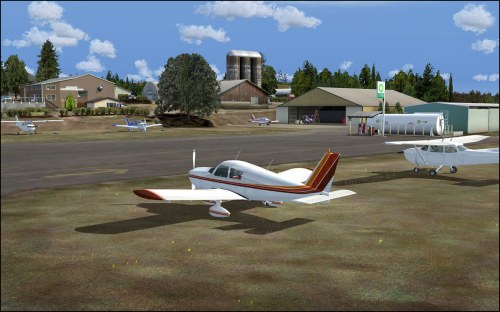 Now that the pre-payers have been taken care of, the more cautious can finally purchase Twin Oaks any time you like.

While this isn’t the most time I’ve ever spent on a scenery project (Tongass Fjords has that honor), it’s a close second. Just for reference, Plum Island took me about 6 weeks to complete. I’ve got somewhere in the vicinity of five months of my life tied up in Twin Oaks. So yeah, you can expect me to crow about it a little here.

This is the blurb I wrote for the manual:

Small, family-run airports are vanishing almost as rapidly as small farms in the rural US. Fortunately, you can still find both on the outskirts of Portland, Oregon. Nestled into the rolling hills south of suburban Hillsboro, between a hazelnut orchard and an alpaca farm, lies Stark’s Twin Oaks Airpark.

Pilot Herb Stark discovered the property, a former dairy farm, on a drive one day in the 1970’s, and immediately recognized its potential as an airport. In 1980, his son Bob and Bob’s new wife Betty took over operation of the field and began improving the land to make a stable base for a runway. Since then, they’ve worked tirelessly, adding hangar after hangar (the first few built with their own hands), building up the facility into one of the most welcoming small airports in western Oregon.

Weekdays are quiet at Twin Oaks, with only a handful of operations—mostly student pilots taking instruction from one of the several CFI’s based here. But on weekends when the weather cooperates, the place is alive with the buzz of aircraft engines as hordes of weekend pilots flock to the field.

For pilots looking to explore the Pacific Northwest, Twin Oaks is an ideal base. The rocky Oregon coast lies just beyond the mountains to the west. Eastward, past Portland, is the entrance to the Columbia Gorge, where the broad Columbia river cuts a gash through the Cascades. Mt. Hood is nearby, as is the humped dome of Mt. St. Helens. Even in a slow plane, there’s a wide variety of stunning vistas within reach of the airport.

To orient you, here are a few shots of the real deal:

And, of course, there’s this video that I featured last week.

And now, some great screenshots of the virtual version, courtesy of Nick Churchill.

Twin Oaks and the PNW Experience

I’m sure you know by now that the canvas onto which Twin Oaks is drawn, the FTX NA Blue scenery by Orbx, was released last week. The combination of these two sceneries is so close to real, it’s spooky. Being a Northwesterner myself, I can say that with some authority. I was going to write about some fun Pacific Northwest places that you can get to from this little airport, but a friend turned me on to a forum post that describes a perfect weekend flying scenario, drawn from (gasp!) real life… check it out here. It says it better than I ever could.